Predators, Prey, and Snowdrops: Recognizing the Nature of the World 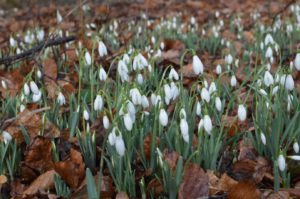 Some Amazonian Indigenous people recognize two ways in which living beings relate to others, as predators and prey. More accurately, sometimes a being acts as a predator and sometimes they become prey. A hunter (human, jaguar, deity, cannibal, or other predator) sets out to find prey. But perhaps, somewhere along a forest path, they find themselves hunted. I’ve been thinking about these relations, off and on, for some time–inspired by reading the work of Eduardo Viveiros de Castro, Robin Wright, Laura Rival and other Amazonianists. Reading them alongside works by the philosophers Bruno Latour and Isabelle Stengers (who also read these Amazonianists) has led me to wonder what their observations tell us about the consumerism that marks ways of being human in late modernity or the Anthropocene–or whatever you like / dislike naming this era.

How are these predator/prey relationships helpful in grappling with our global culture and economy? Might the language of predator and prey enable us to see the workings of consumerist modernity more clearly? It certainly seems that sometimes we are preyed on or consumed by processes larger than ourselves. Extractive industries and aggressive marketing assault our world and ourselves. But we are not always victims. We also seek to capture and benefit from opportunities available to us. Even when threatened, we might actively rebel against those determined to turn what we cherish into commodities for further predation. We are not always limited as preyed-upon consumers.

These processes of predation or taking and of resistance, cherishing, or sharing, are important in what Isabelle Stengers calls “Cosmopolitics.” This invites us to expand our politics to actively involve the larger-than-human community. It means remembrance and renewed emphasis on sharing the world with other species, and creating better ways of relating with those other-than-human neighbors. Climate change, ocean acidification, and mass extinctions make these efforts more urgent and these relations more precious.

Further reflection on Amazonian understandings of the world makes things both more complex and more interesting than just a tension between being predator or prey. According to Indigenous people there, as Eduardo Viveiros de Castro shows, all beings see themselves as humans and relate with those of other species accordingly. Jaguars, on this view, see themselves as the humans. They see their food as not-cooked rather than as raw meat. They see homo sapiens as preying animals. From the perspective of peccaries, they themselves are the humans, other peccaries are family or clan members, and homo sapiens look like predator-spirits. My point in bringing this up is not to ponder whether Amazonian worldviews are correct or not, or whether they are better or worse than other views. Rather, I note them to emphasize the complexity and diversity of ways of understanding what makes someone a “person.”

Marilyn Strathern’s term “dividuals” and Ernst Halbmayer’s “multi-dividuals or multividuals, multiply partible persons, examine the notion that a person is an assemblage of relations. A parent can also be a novelist, a judge, a friend, a critic, a sports-player, and a bird-watcher. These are words for relationships. A person is not the same being to everyone else. We are made of divided and multiple relations. We might imagine ourselves to be individuals but we are as much “dividuals” as the Melanesians who inspired Strathern’s argument.

I propose that snowdrops help us radically expand our approach to who is a person. As I write, the ones outside are busy relating to the larger-than-snowdrop world. Some may disparage such a statement as anthropomorphism, an unwarranted attribution of “human likeness” to non-humans, but Vinciane Despret brilliantly turns the tables on that critique. She contests the view in which “human-like” behaviors, when observed in animals, are called “instinctive” or “biologically determined” rather than personal relations or acts towards others. She argues that an interesting test of an animal’s self-awareness and of their ability to see another’s perspective is to observe whether they hide well. Discovering themselves to be hunted often causes animals to hide where they think their predator cannot see them. Predator/prey relationships demonstrate theory of mind: the ability to see oneself as others see us.

Do snowdrops have “minds” and relationships? They probably don’t do selfies and don’t seem to hide. Instead they offer blossoms that are attractive to others. In line with Anna Tsing’s insight that interactions between different beings (of whatever species) are events (and thus indicative of a history of unfolding), snowdrops engage with wider events in the woods. They present their flowers to light and insects when there is just the right amount of light and warmth to be sensible.

Recognizing these (as) events is not only an aspect of our (human) participation in the larger-than-human world but is also key to re-cognizing the nature of the world we need to move through differently in this time of ecological crisis.

Graham Harvey is professor of religious studies at The Open University. His research largely concerns “the new animism,” especially in the rituals and protocols through which Indigenous and other communities engage with the larger-than-human world. These contribute to a focus on material- and lived-religion. His recent teaching related work has involved a focus on foodways and associated “purity” practices. His publications include Food, Sex and Strangers: Understanding Religion as Everyday Life (2013), and Animism: Respecting the Living World (2nd edition 2017). He is editor of the Equinox series “Religion and the Senses” and the Routledge series “Vitality of Indigenous Religions.”

This Counterpoint blog post may be reprinted with the following acknowledgement: “This article was published by Counterpoint: Navigating Knowledge  on 06 Feb. 2019.”