On Life, Dogs, and Chernobyl 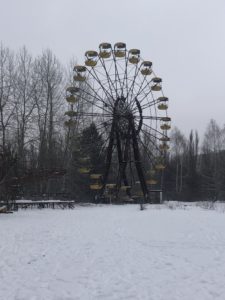 As someone who works in the broad field of “religion and nature,” and who regularly teaches a course on “Earth Ethics,” I jumped at the opportunity to visit one of the defining environmental disasters of our time: Chernobyl.  The disaster there in 1986 was one of the events that defined my childhood. Another was the Challenger space craft tragedy. As a 10-year old, doughy-eyed about the future, I sat in my fifth grade classroom and watched excitedly as the first school teacher was propelled into space. Then, boom. It exploded seventy-three seconds after take-off.

It wasn’t until later that I realized just how much that explosion affected me.  It has become a metaphor for me of the hollowness of the Reganomic, conservative, “Family Values”-driven “American Dream,” the idea of inevitable progress and, if you work hard, success. Along with that literal explosion was the symbolic explosion of my blind trust in that dream “America.” For the first time, I questioned my teacher: “Why does it say ‘In God we Trust’ on our dollar bills?” To which her retort was: “Because we do!” Maybe it was the old conversation-stopper “because” used as a justification, or maybe it was because I thought there was a problem with putting God on printed money—hello Mammon—or maybe both, but the veil of blind trust was lifted. I wasn’t going to stop turning over every rock.

Then in April, I heard about Chernobyl—something happened with an explosion. It was causing a lot of pollution.  I’m not sure how aware I was of “the Cold War,” and “nuclear fallout” much less the environmental and political implications of these words. But I knew it was bad.

Unlike the Challenger, Chernobyl was more of what Rob Nixon calls Slow Violence. Slow violence takes time and has effects over generations. Indeed, slow violence uncovers the multiple forces and accumulation and intersection of events that lead to violence against certain bodies generation after generation.  In addition to the obvious fatalities at the time of the Chernobyl disaster came the countless fatalities decades later (and more still to come).  This was indeed a disaster of planetary proportions as the radioactive materials nomadically roam the atmosphere, and as we continue to monitor the unknown effects today.

My ten-year-old awareness of Chernobyl became a magnet for many different things I heard: “Cold War,” “nuclear waste,” “radiation,” “environmental disaster,” “socialism,” and “commies.”  It was my first sort of global awareness, I suppose, and I didn’t quite know how to “fit” all of the information together into a single narrative.  It was only with my recent trip to Chernobyl that I realize that I couldn’t fit it into a single narrative because it was all of those narratives…and more. 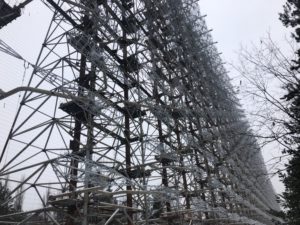 For some, Chernobyl is the beginning of the end of the USSR.  The Chernobyl plant (the so-called heart of Russia) along with the giant, failed, nuclear detection radar nearby (the so-called eyes of Russia) were among the key factors that financially and symbolically ruined the USSR.  The resulting 1989 Fall of the Berlin Wall (or “Wende,” Turn, as the Germans say) is perhaps the starting point for today’s global politics. After this fall, we were left with the forced globalization of Thatcher’s T.I.N.A. and Regan’s neo-liberal capitalism. Though globalizing neo-liberal capitalism seems to be reaching some serious limits (gross economic inequalities, climate change, and competition from newly capitalist China), any economic narratives today would need to interpret the significance of the Chernobyl event.

For others, Chernobyl is a warning against the Promethean tendencies of humanity and a lesson in our own creaturely, planetary vulnerabilities.  If we severely damage the environment, then we damage it and ourselves for millennia to come. As I walked through Chernobyl’s abandoned buildings and structures, I flashbacked to my 10-year-old self: it was as if I was finally putting all these pieces together. I understood how I lost faith and hope in the “American dream.” Chernobyl revealed that dream as a mirror reflection of the Potemkin realities promised by communism. I understood better how and why I became passionate about “the environment” at an early age–a passion that influenced my career choices.  Chernobyl was not just a news story; it was deeply intimate—as are the radioactive particles that circulate in and out of our bodies from this single disaster. Somehow understanding Chernobyl as part of my own story helped me to also learn more about myself as a planetary creature, my understanding of living in the world. 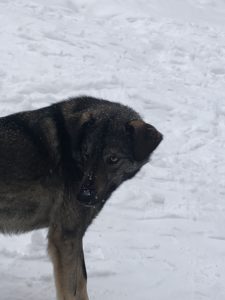 But, my thoughts in Chernobyl didn’t stop with apocalyptic narratives.  The famous dogs of Chernobyl kept pulling me away from despair.  These lively creatures, most likely unaware of the radioactive ground underneath them that is their home, were playful, “happy,” and eager for human attention. The tour buses that come through on a daily basis are full of gullible humans that feed these cute creatures, but still there was something about the way in which these dogs, just by being dogs, offered a resistance to the destruction that Chernobyl represents. Through them, I began to notice that there were also birds and, at least according to our guide, wild foxes, horses, and wolves.  There was new tree growth, and the trees have begun to “take back” the land from what was the Potemkin settlement of Pripyat, built as an ideal, modern communist city where foreign diplomats would be shown just how well the USSR was doing. 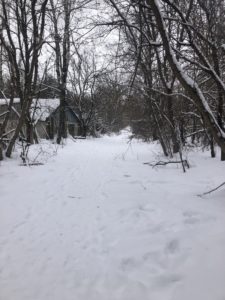 The nature being reborn in Chernobyl is not a rebirth of pristine wilderness. Nor is it a depraved post-apocalyptic desert. Since very few people stayed in the region or returned to it, the land is largely a post-human rebirth of something different from anything past but where life continues to live. In this, I find some hope for our planetary future. In the international cooperation that continues to clean up and monitor Chernobyl, I find small hopes for our planetary future. In the replacing of nuclear reactors with solar conductors , I find hope. In that visit, my 10-year old self, jaded by years and these earlier explosions, found a second, post-naïve hope.

Whitney A. Bauman is Co-Founder and Co-Director of Counterpoint, as well as Associate Professor of Religious Studies.  He is the author of several books and articles including: Religion and Ecology: Developing A Planetary Ethic (Columbia University Press, 2014).

This Counterpoint blog post may be reprinted with the following acknowledgement: “This article was published by Counterpoint: Navigating Knowledge  on 13 Feb. 2019.”