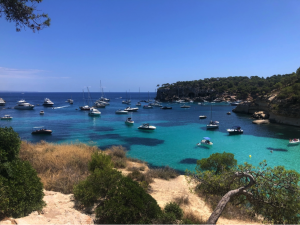 German biologist and writer Andreas Weber has written “the book” on erotics and ecology. I began reading his book on a recent trip to Mallorca. The purpose of the trip was to have time to “recharge” by the ocean—I am very much a water person—after having been under lockdown due to the Corona pandemic. Weber reminds us that erotic relationships don’t always end up “nice,” and that we can be hurt or even killed by them. However, it is futile to think we can wall ourselves off. We may be able to trick the rest of the natural world through technology and medicine, just long enough to live 80ish years, but we can’t expect that we will (as some transhumanists argue) live forever. As humans, we are part of this planet and we have the desire (rightly so) to carve out a space for us to live, but we must do so in the way that an open relationship might work: we don’t own anything, especially not other bodies, and we can’t treat other earth entities as a mere means to human ends. Let me end this scene with a quote from Weber: “This world … comprises a constantly oscillating network of dynamic interactions in which one thing changes through the change of another. … And to make this relationship possible, it is necessary that the two sides touch each other, that they nestle into one another, penetrate one another, grind themselves against each other. This is the fundamental erotic that constantly makes new things out of other things” (p. 22).

Scene 3: My Date with Nature

Counterpoint blogs may be reprinted with the following acknowledgement: “This article was published by Counterpoint Navigating Knowledge on 21 July 2020.”