Minding the Gap: No Space for Women, Fifty Years and Counting 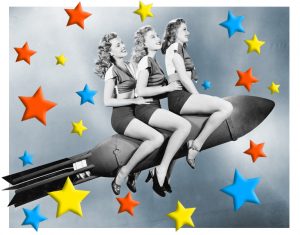 A telling moment at a 1974 Johns Hopkins symposium: As famed rocket scientist Wernher von Braun describes his plan for sending a man to Mars, someone in the audience asks, “What about women?” Von Braun’s glib reply: “Women’s lib will see to it.” The laughter that follows is even more revealing. “Women on Mars—that’s a joke, right?” The men at NASA, fixated on the male-centric “right stuff,” had no plans to make space travel more inclusive. That, as von Braun said, was women’s work.

Soon after the end of Apollo, men were supposed to go on to Mars, but plans were scuttled as the urgency of the space race ebbed. In 1972, as astronauts left the moon for the final time, the women’s movement was gaining traction, calling out sexism, and demanding change. Within the next year, Title IX was enacted, ensuring equal access to all areas of public education, including science/tech classes that were often off-limits to girls. At NASA’s Jet Propulsion Laboratory, an affirmative action program created new opportunities for female scientists and engineers. Ms. Magazine featured a cover story with a hopeful title: “Yes, we do have women astronauts.”

Humans were poised to become a more diverse spacefaring community, and women were preparing to lead the charge.

And yet, half a century later, there never has been an all-female crew: With the exception of Valentina Tereshkova’s 1963 solo mission, women haven’t been allowed to explore space by themselves. There has never been a “first in space” by a woman—female pioneers are always qualified as the “first woman to…” We still don’t have a gender-neutral way to describe human excursions into space—most still call them “manned” missions.

The percentage of women in space, compared to men, hovers around 10–11 percent, while the numbers on the ground, in both government and private enterprise, show a similar imbalance. Women are about 23% of NASA’s total workforce, with 14% in leadership positions: at Blue Origin, it’s 17.4%; at Boeing, 23%; at SpaceX, only 12.4%. A 2017 photo of SpaceX employees celebrating the first successful launch of its heavy-lift rocket invites a challenging game of “Where’s Waldine?”

During the past half century, human spacefarers have been on a very short leash, venturing no farther than low Earth orbit; meanwhile, the women’s movement that was primed to usher in equity in space has stalled out as well. I can’t stop thinking about that 50-year gap in which we’ve gone nowhere, not as astronauts, not as feminists.

What do we want?

When do we want it?

Oh, maybe in a half century or so…

I used to think that it was a good idea that humans had taken such a long break from deep space exploration. The progress we made during the women’s movement needed time to take hold. Women needed time to ramp up, earn advanced degrees, launch careers, and gain valued professional experience that might put them in leadership positions for future space missions. The space industry (public and private) would have plenty of time to develop more equitable recruitment and advancement policies. Educators could use this time to revamp and expand STEM education, making it accessible and welcoming for all. Parents would be able to raise a new generation of spacefarers, including daughters who wouldn’t take “no” for an answer if being an astronaut was what they wanted.

But now, I can’t help but think that during that half-century gap, we squandered the time we could have better spent securing our futures in space. While hanging onto the “right stuff,” we’ve missed building the inclusive stuff that would make space exploration accessible to all.

What happened? Or, rather, what didn’t happen? Why didn’t the “libbers,” as von Braun suggested, “see to it?”

The feminism that sizzled in the early 1970s fizzled over the next few decades. The movement broadened, diffused, and eventually splintered into factions (women of color, lesbian women, working class women), each defining a different flavor of feminism. Many joined timely and laudable movements like Black Lives Matter, worked for LGBTQ rights, marriage equality or became eco-warriors. Moreover, because there were positive changes for girls and women, the sense of urgency that had fueled the efforts of feminists in the seventies lessened in the eighties and nineties to the point of non-viability.

Today, I wonder if there are any space feminists: a quick Google for the term comes up empty. If there are, and if these remaining activists need a renewed sense of urgency, it’s here.

We’re on the cusp of a new space age. Within the next decade, we’re likely to establish a permanent moon base and see the first human touchdown on Mars. Spacefaring has become truly international (there are more than 80 spacefaring nations). Private entrepreneurs are pumping money into commercial missions designed to get us farther, faster. As humans mount new deep space missions, it’s critical to ask whether, this time, we will represent ourselves fully and accurately when we once more leave our home planet and venture to other worlds.

Small steps are evident: STEM has expanded to include its arts-infused partner STEAM. NASA’s Artemis program promises this time to send a woman to the moon. The European Space Agency (ESA) just opened its astronaut application window with an appeal for diversity. Last year, the U.N. Office of Outer Space Affairs (UNOOSA) launched an international Space For Women mentoring program and network to address lingering inequalities. These positive signs are more like course corrections: Necessary and welcomed adjustments that should not be interpreted as the systemic change that would signal we have achieved gender equality.

What’s critical now is how we spend the next half-century.

No one’s handing out seats on NASA’s SLS mega-rocket or the SpaceX Starship like treats, or opening the doors in mission control, research labs, or STEM classrooms so wide that a few females can’t help but stumble through.

The feminist activists of the seventies were effective because of what might best be described as an “I-won’t-sit-down-or-shut-up-until-this-problem-is-solved” approach. Because of their collective passion, commitment, and determination, the women’s movement actually moved the needle for all women, in all areas. Now, the universe demands an even bigger movement.

Von Braun was right. If women (or any other under-represented group, for that matter) want to claim their place in the new space age, or to close the looming gap between what was and what can be, the “libbers” (let’s just call them feminists) had better get moving again, and this time, it’d be best to shift it into hyperdrive.

Jan Millsapps, Professor Emeritus of Cinema at San Francisco State University, is a veteran filmmaker, a pioneering figure in the new media movement, an early web innovator, and a versatile and accomplished writer.

She has produced films, videos, and interactive media on subjects ranging from domestic violence to global terrorism and has written two space-themed novels. Her documentary, Madame Mars: Women and the Quest for Worlds Beyond, premiered at the U.N. and has been shown at the New York Academy of Sciences, Arecibo Observatory in Puerto Rico, the University of Cambridge in the U.K., and at numerous film festivals. In 2020–21 she and her film were chosen for the US State Department’s educational and cultural exchange program, the American Film Showcase.

Millsapps has spoken about the need for diversity in space at several Mars Society Conventions, the United Nations, and the SETI Institute. She is a founding member of the global Space4Women support and advocacy group and in 2020 was named a mentor for the Space4Women network, a new initiative by the United Nations Office of Outer Space Affairs (UNOOSA).

This Counterpoint blog may be reprinted with the following acknowledgement: “This article was published by Counterpoint Navigating Knowledge on 8 June 2021.”The views and opinions expressed on this website, in its publications, and in comments made in response to the site and publications are those of the author(s) and do not necessarily reflect the views and opinions of Counterpoint: Navigating Knowledge, its founders, its staff, or any agent or institution affiliated with it, nor those of the institution(s) with which the author is affiliated. Counterpoint exists to promote vigorous debate within and across knowledge systems and therefore publishes a wide variety of views and opinions in the interests of open conversation and dialogue.

Image credits: Rocket Ride, a collage made by the author, © Jan Millsapps 2021.