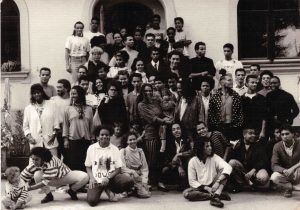 Debates over rights, citizenship, and belonging in Germany (as elsewhere in Europe) often revolve around competing notions of history, different bodies of knowledge about the past and how it relates to the present.

There is a popular vision of German history understood in terms of the rise, fall, and redemption of the nation. This model relies on the idea of a coherent nation whose awakening and unification have been natural, even inevitable historical developments. This presumption is based on the idea of a broadly shared and distinctive culture, which is cast into sharp relief when “diversity” enters the picture. Usually confined to the postwar period, diversity serves as a sort of multicultural add-on to the national narrative, one associated with unprecedented migration and ethnic otherness. Thinking about difference in this limited way reinforces the idea that there’s a longstanding inheritance that can be used to define who belongs in German society.

There are insurgent visions of German history that challenge myths of national cohesion. Insurgent visions are often written from the presumed margins, but they are actually central to understanding defining features of German history: the challenges of movement, intercultural encounters, and structures of inclusion and exclusion. In these visions, such challenges date back many hundreds of years and have provoked many sorts of mythical responses; the myth of a cohesive nation is just one recent invention used to hide a more complicated and contentious reality. These myths are unstable and contested and anything but inevitable. They are also powerful, not least because they define who can be seen or known. Insurgent visions insist that we see and know that unexpected people were present, in both the present and the past, and they explain how that presence has been hidden in plain sight.

I am the managing editor of a collaborative project called Black Central Europe that draws inspiration from these insurgent histories, most especially those that have been lived and written by Black German-speakers (and visible through a number of other web projects). Black Central Europe provides sources on histories of Blackness in the German-speaking lands from the Middle Ages to the present, and it does so to undermine the myth that these lands have always been monolithically white places disconnected from the wider world. By presenting diverse and often surprising histories of contact, mobility, camaraderie, and marginalization, we can come to a better understanding of how residents of central Europe have always grappled with ideas of difference and commonality. We can see how exclusionary myths came to be, and we can also see how Black residents actively contested them as they lived out many different ways of being Black.

Two photographs offer what might be unexpected pictures of German lives before the First World War. 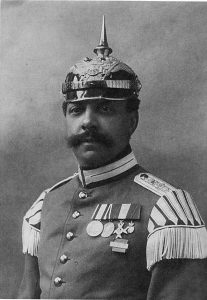 In the first, Gustav Sabac el Cher poses, a Black man in Prussian blue. Born in Berlin in 1868, the son of a latter-day “courtly Moor” who had made his name with the royal family, Sabac el Cher trained at the Royal Academy of Music and joined the Prussian army. He served with distinction in the music corps and later made a successful private career as a musician, conductor, and garden café owner through the Weimar years. He and his white wife Gertrud were patriotic Germans, members of the Stahlhelm, and on at least one occasion he publicly protested being slandered by racists. In 1907 when he was accused in a right-wing newspaper of being a foreigner, a corrupter of German military culture, music, and women, Sabac el Cher sued and won his case handily. Despite their dedication to the Fatherland, however, Gustav’s and Gertrud’s stories ended in disappointment and hardship when the national revival promised by the Nazis had no room for them. They were forced to close their businesses and died shortly thereafter, in 1934 and 1935 respectively. Their two sons went on to serve in the Wehrmacht, with only one of them surviving the Second World War.

In the second photograph, Kwassi Bruce goes to school with a number of classmates. 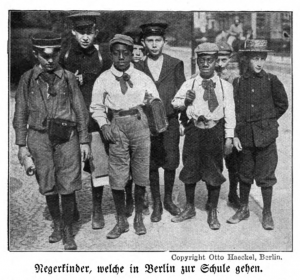 As a child Bruce was brought to Germany from Togo to take part in the 1896 Berlin Colonial Exhibition. His father, hoping to cultivate connections in the metropole, left his son in the care of a Berlin department store owner who used him as an exotic mascot but also facilitated his attendance at an advanced secondary school and a private conservatory, where he learned the piano. Bruce began a career as a musician and bandleader that was briefly interrupted by service in Togo during the First World War. When he returned, like many Black Germans, he faced growing difficulties in the economic and political instability of the Weimar era. Unusually, Bruce acquired German citizenship, and his musical skills gave him access to one of the few professional outlets open to Black residents in those hard times. When the Nazis came to power and it became nearly impossible for Black Germans to find work, he protested to the Colonial Office against the racist discrimination that was making it hard for him and many others to support themselves. Not content with mere protest, he also co-organized a travelling “people show” (Völkerschau) to employ Black performers. The German Africa Show both romanticized and parodied Germany’s colonial past, but Nazi authorities took over and finally closed it down in 1940 because it challenged their racialized worldview. With no opportunities to support himself in an increasingly hostile environment, Bruce left Germany for Togo and finally settled in France.

As traces of their lived experiences, these photographs remind us that the Age of Empire was an age of increased mobility that produced new opportunities for interaction, integration, and conflict across racialized lines. Black people were present in central Europe in larger numbers than ever before, most just passing through but others settling down. These photographs and the stories they represent undermine the mythical notion of a unified, homogenously white German nation, and they can also show us the tools by which that myth was constructed. Bruce’s photograph was published in an article on “exotic guests” in Berlin, and the caption draws attention only to the two “Negro children who go to school in Berlin.” By doing so, the article explicitly equates Bruce’s Blackness with foreignness in order to undermine an image of inter-racial camaraderie among German schoolboys.

This sort of tactic denied the messy reality of being Black in the German lands, a reality defined by varying degrees of social integration and identification and by diverse struggles against racist exclusion. By insisting that Germans like Bruce and Sabac el Cher could be only temporary visitors, exotic curiosities, or worse, critics tried to hide a Black German presence in plain sight. They drew attention to Blackness in order to define it as distinct from Germanness. Such instances were an everyday part of a wider set of processes whose exclusionary legacies have lasted into the present.

Insurgent histories confront those legacies. When thinking about the terms of belonging in the past or in the present, they insist that we acknowledge contestation as much as coherence, that we pay attention to both diversity and the efforts to explain it away. They force us to reconsider what we know and what we can see.

Jeff Bowersox is an Associate Professor of German history at University College London. He is the author of Raising Germans in the Age of Empire (2013) and is the managing editor of blackcentraleurope.com. His current research project follows African-American variety performers in the German lands before the First World War, exploring their contributions to transatlantic debates around nation, culture, and modernity.

Note: This post contains edited excerpts from a chapter appearing in the forthcoming book, Curating Transcultural Spaces, edited by Sarah Hegenbart and published by Bloomsbury Visual Arts. Reproduced with permission from the publisher.

Counterpoint blogs may be reprinted with the following acknowledgement: “This article was published by Counterpoint Navigating Knowledge on 22 February 2022.”