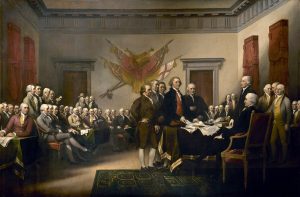 Some Europeans came to North America to gain religious freedom. Those who declared independence from England sought freedom from authoritarian rule. Yet these people participated in the genocidal deracination of the continent’s first people and the kidnapping and enslavement of scores of human beings from the African continent.

Ironically and tragically, in the very declaration of independence with its lofty statements about the self-evident truth of human equality, there is also the explicitly racist reference to the “merciless Indian Savages,” which the Declaration complains, the Crown had been using against the colonists. The founders also considered women to be inferior who, after the revolution succeeded, were denied the right to vote and thus the very liberties sought by the nation’s founders.

Nevertheless, the Declaration did initiate something important and valuable, a globally important attack on authoritarian rule. But recognizing or celebrating this event ought to be accompanied with acknowledgement that although this represented step toward liberty for some and promoted a powerful egalitarian logic, it also empowered the destruction of liberty for many.

There is another shadow side to the celebration of the Declaration of Independence, namely, the way it reinforces the pernicious notions that we can, and should, be independent.

Neither of these notions is true.

Indeed, the prospect for liberty relies on a profound understanding of interdependence; without the bonds of sociality, cooperation, and trust, there will be fear and consequently, at best, a limited liberty.

This assertion is nothing new. Philosophers left and right have embraced it, including the Conservative stateman Edmund Burke who, just a few months after the French Revolution began, wrote to a correspondent, that the freedom he loves . . .

is not solitary, unconnected, individual, selfish liberty, as if every man was to regulate the whole of his conduct by his own will. The liberty I mean is social freedom. It is that state of things in which liberty is secured by the equality of restraint. A constitution of things in which the liberty of no one man, and no body of men, and no number of men, can find means to trespass on the liberty of any person, or any description of persons, in the society. This kind of liberty is, indeed, but another name for justice; ascertained by wise laws, and secured by well-constructed institutions.

This recognition, that human liberty is dependent on respectful social relations and the mores and laws we create to promote and enforce them is important, but insufficient. There are other indispensable dependencies and thus unavoidable interdependences, namely, our absolute dependence on the entire web of life.

It is understandable that those who crafted the Declaration of Independence did not discuss such interdependencies. They had not set out to write a green social philosophy. Nor did they have the post-Darwinian advantage of knowing that all organisms share a common ancestor and are kin, related biologically. They had no reason, therefore, to wrestle with the moral implications of this gestalt-changing scientific understanding, no reason to consider as I and others have the connections between evolution & kinship ethics.

In diverse times and places, however, there have been people who understand themselves as belonging to and being in deep reciprocal relationships with the chorus of life around and in them. Indeed, scholars from diverse disciplines have been documenting the ways that the perceptions, values, and practices of traditional and indigenous societies often evolve, within their habitats, in ways that promote adaptive and resilient socioecological systems. Such understandings are reflected in the titles of the growing number of books that explain such processes as, for example, in Sacred Ecology and Traditional Ecological Knowledge.

It is not only in traditional and relatively small-scale societies that such perceptions and values are to be found, however.  As I argued in Dark Green Religion (and in its German translation, Dunkelgrüne Religion), there are people all over the world who feel kinship with non-human organisms, and understand that they belong to nature and that the health of the living world is rooted in its diversity and interdependent nature. They also, often, use religious terminology to convey their ultimate concerns, as for example, when referring to the biosphere as Mother Earth or Gaia, adapting the ancient Greek Goddess of the Earth as a metaphor for their contemporary, organicist, worldview.

The “Rights of Nature” movement, however, may be the most important indication of the growing and global cultural traction of such spiritualities. This movement is typically traced to an argument Christopher Stone initially made in a 1972 article, which he expanded on two years later in Should Trees Have Standing? In them he argued that humans can and should confer legal rights on trees and other organisms and, when necessary, they should be empowered to defend these rights in the courts.

A host of indigenous voices have powerfully complemented such arguments, contending that their cultures have long expressed similar understandings (see, e.g., Should Nature Have Rights?). And legal theorists influenced by such voices have further advanced the legal arguments, as did Cormac Cullinan in his 2003 book Wild Law. Combined with grassroots pressure these voices contributed to a globally significant moment when in 2008 Ecuador passed a new constitution, through which it became the first nation to confer rights on nature in a constitution. The Ecuadorian Constitution drew on indigenous, Andean, cosmologies, when making this stunning declaration:

Nature or Pachamama, where life is reproduced and exists, has the right to exist, persist, maintain itself and regenerate its own vital cycles, structure, functions, and its evolutionary processes. Any person . . . may demand the observance of the rights of the natural environment before public bodies.

These developments sparked fears of pagan socialism among conservative religionists and politicians. Nevertheless, the movement to confer rights on non-human organisms and/or natural entities and environmental systems, gathered steam when in 2010, The Global Alliance for the Rights of Nature was established to intensify and globalize these efforts. Subsequently, the rapid spread of such initiatives has been tracked by The Community Environmental Legal Defense Fund’s timeline of Rights of Nature developments and the United Nations Harmony with Nature program, which has a focus on Rights of Nature Laws and Policies.

It is not only human voices that are precipitating this movement. In her travail, Mother Earth is speaking powerfully about the interdependence and erosion of Earth’s socioecological life-support systems, and the need for human beings to learn their planetary manners.

These are among my musings as another trip around the sun brings us another day in which Americans celebrate their declaration of independence from the Crown. The event leads me to reflect on tragic consequences that have flowed from the declaration’s inconsistencies and anemic vision. But the occasion also provides an opportunity to celebrate an alternative vision and the creative efforts of those who arduously work toward a world that recognizes, both philosophically and practically, the interdependence, kinship, and value of all life.

Bron Taylor is Professor of Environmental and Social Ethics at the University of Florida. He has written widely on the reciprocal influences between social and environmental systems, especially with regard to the quest for social justice and biodiversity conservation. His books include Dark Green Religion: Nature Spirituality and the Planetary Future (2010), Avatar and Nature Spirituality (2013), and Ecological Resistance Movements (1995). He is the editor of the award-winning Encyclopedia of Religion and Nature (2005). In 2007 he founded the Journal for the Study of Religion, Nature and Culture and continues to serve as its lead editor. In 2017, he received a Lifetime Achievement award from the International Society for the Study of Religion, Nature and Culture.

Counterpoint blogs may be reprinted with the following acknowledgement: “This article was published by Counterpoint: Navigating Knowledge on 4 July 2022.”

Photo Caption: This is a photo of a 12’ by 18’ painting by John Trumbull, which was completed in 1819 and is titled “Declaration of Independence.” It hangs in the rotunda of the United States Capital.

Photo credit: An employee of the Architect of the Capitol took this photograph. It is therefore in the public domain in the United States of America.