Green Spiritual Technologies: Putting the Anthropocene Era to Rest (One Day a Week) 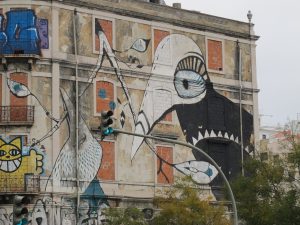 The shutdown forced on much of the world by the Coronavirus pandemic has focused attention even more urgently on questions related to work: economic inequities, exploitation of workers, work’s meaningfulness, the quality of the work environment, and of course work’s ecological ramifications. Creative and radical technocratic analysis and solutions are being offered, for instance by researcher Phillip Frey, the Zentrum Emanzipatorische Technikforschung (Center for Emancipatory Technology) and the Autonomy think tank. Noting the link between overly-long working hours, worker burnout, overproduction and environmental harm, Frey and his colleagues have proposed work-free Fridays, Freeday for Future. Though attuned to cultural factors, either they are unaware of or choose not to reference an age-old, similar spiritual technology, the idea and practice of a weekly sabbath.

In the call for environmental solutions, rituals have arisen with increasing frequency. The reasons for this are many. Secular, rationalist, scientistic modernism is often understood to be the cause of today’s planetary environmental collapse. In some ways postmodernism has (re)turned to and reassessed the cognitive and cultural aspects ex(or)cised by modernism. Within the environmental movement itself, taking it in the widest possible sense, a growing number of people want more than mere technocratic problem-solving, yearning as well for procedures, discussion, and approaches that take into account and address the emotional, psychological, and even spiritual/metaphysical layers of ecological work. In 2016 Stephen Cave and Sarah Darwin penned a provocative recognition of ritual’s potency for the ecologically-minded. To mourn species that have gone extinct, some people came up with Lost Species Day. Artist Marcus Coates produced a thought-provoking video about a 2017 Irish project to issue a public apology to the Great Auk, which had just been declared extinct. Others have turned to Indigenous and non-western practices as models.

Whether we like it or not, ‘religion’ remains one of the world’s most powerful forces. Given the urgency of our environmental crises and the fact that a large majority of people in the world continues to live and think cosmologically or spiritually, environmentalists ought to be self-conscious, thoughtful, playful (always an absolutely serious business), careful, and bold when using, (re)interpreting, revising, and (re)creating practices from traditions. This, after all, is how the history of religions works: change masking itself as tradition’s original intent. When it comes to mitigating human harm to our own environment, some religious leaders have proven themselves creative and intrepid in putting their traditions to use. In just one example, Buddhist monks in Thailand, Cambodia, and Sri Lanka ordain trees, wrapping them with colored sashes, to remind people of their sacredness and prevent their being cut down.

The biblical and rabbinic idea of a weekly day of rest emerged from a holistic spiritual ecology. As described (and idealized) in the Bible and rabbinic literature, early Israelite and Judaean rabbinic societies are now understood to have been Indigenous societies (regardless of actual geographic origins) grounded in an ecotheology devoted to the intertwined well-being of its land and people, a quasi-animist, trans-species community opposed to internal socioeconomic inequality and the empires of the region. The rabbis of the Talmudic era forged from the biblical practice a ritualized “temple in time” (Abraham Joshua Heschel) whose main theme is avoiding the manipulation of nature for one day a week. For religious Jews of all stripes, shabbat has remained central, meaningful, and beloved, even as they have modified the way they observe shabbat.

Along with many others, I have come to see a weekly day of rest, a green sabbath, as an environmental remedy with unique potential. I am drawn to its imperative—counter-intuitive, provocative, never timelier yet still often suppressed even in environmental discourse—to “do nothing.” “Doing nothing” one day weekly is not meant to replace political, economic, or technological environmental solutions, but to help reinforce them, to unify them in a meaningful armature of culture and intention. Even the most secular individuals increasingly appreciate these insightful and urgently relevant understandings of the beauties and benefits of the sabbath. We see more and more calls for “sabbaths” from our modern technologies, such as filmmaker Tiffany Shlain’s Technology Shabbats, cities implementing car-free days, or The Center for Emancipatory Technology’s Freeday for the Future. The lesson of making do with less, of finding inner contentment, the sabbath ethos, is meant to infuse behavior for the rest of the week. This ancient spiritual technology, updated and harnessed for the Anthropocene era, offers a holistic vehicle for addressing the intersecting political, economic, cultural, spiritual, and psychic causes of human environmental degradation.

The green sabbath, or a weekly earth day, appeals to me for many reasons. The cosmic and trans-species design of shabbat (it is for the entire creation) challenges our comfortable and dangerous anthropocentrism. The clearly spelled-out high expectations of rabbinic shabbat, even if modified for secular individuals and communities, promise real results for both the planet and individuals. The idea and practice of a weekly day of rest is indigenous to Judaism, Christianity, and, in a more ambiguous way, Islam. Given that the West has been primarily responsible for the destruction of our planetary ecosystems, urging westerners to curtail their environmental harm through a familiar practice from their own cultures makes particular sense and promises to have a particularly significant impact.

A weekly green sabbath properly practiced—as radical intervention and not mere lip-service—offers a weekly interruption of the suicidal economic fantasy of infinite growth, a weekly divestment from fossil fuels, a weekly investment in family and local community, a weekly bit of rewilding, a respite for both humans and other-than-humans, and a ritualized forum for meditating on how we want to live. As Greta Thunberg reminds us, we already know what the solutions are for our environmental crises. Green sabbaths could provide a recurring greenhouse for incubating the required collective consciousness and willpower—the ultimate renewable energies—to make the solutions reality. Green sabbaths could constitute both a model and a foretaste of an ecologically-sane world to come.

For a more detailed exposition of my argument, see my article, “The Sabbath in an Era of Climate Change.” Committed to putting theory to use and bringing the fruits of the humanities to the general public, I founded the Green Sabbath Project last year.

Jonathan Schorsch is Professor of Jewish Religious and Intellectual History at the Universität Potsdam, and founding director of the Green Sabbath Project and the Jewish Activism Summer School.

Counterpoint blogs may be reprinted with the following acknowledgement: “This article was published by Counterpoint Navigating Knowledge on 8 July 2020.”