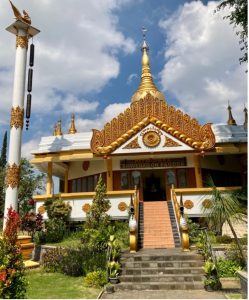 According to the 2021 data of the Ministry of Internal Affairs, there are approximately 2,033,608 Indonesians practicing Buddhism which is equal to 0.74% of the total population. About 237.53 million people or 86.9% of the population practices Islam, and the rest are registered as Christian, Hindu, Confucian, and Indigenous religions. This demographical data shows that Indonesia is a religiously diverse country. The recent recognition of Confucianism as one of the official religions adds even more to the diversity of religions in the country.

Though there is a long tradition of Buddhism in the archipelago (prior to the formation of the nation), the emergence of Buddhism in modern times starts in the early twentieth century, when the country was under Dutch colonial rule. In this period, the emergence of Buddhism in the Indonesia archipelago was partly a result of the interaction of people from different ethnic and national backgrounds. There are at least four major agents responsible for the making of Buddhism in Indonesia. The first are the Chinese descendants who have lived in the Indonesia archipelago for a long time. They played an important role in making Buddhism a practiced religion in colonial society. During this period, the Chinese descendants, also known as peranakan, were experiencing a revitalization of Chinese identity. As part of Chinese religion, along with Taoism and Confucianism, which together were known as Sam Kauw (what is known today as Tri Dharma), Buddhism became an aspect of old beliefs that the Chinese descendants in the Indonesia archipelago wanted to revive.

The second contribution to Indonesian Buddhism is the bumiputra group, the Javanese who were members of the theosophical society group and members of Indigenous groups. The third contributors are western individuals. The western world spread the study of Buddhism as part of “global eastern wisdom awakening.” Many Dutch citizens, for instance, took an interest in Buddhism, particularly Theravada Buddhism from Burma. The last major agent contributing to Indonesian Buddhism was a Sri Lankan monk who arrived in Batavia (now Jakarta) in 1934. Thus, during the Dutch colonial period, Buddhism was shaped by global networks of organizations and individuals from various countries.

After Indonesia gained independence in 1945 and shortly after the period of revolution, the Buddhist community resumed their religious activities by reinstating Buddhist organizations. One of the most noticeable shifts in this new era was that the Indonesian Buddhist networks became more influenced by mainland Southeast Asian and South Asian forms of Buddhism. The new relationship with mainland southeast Asia was evidenced by the establishment of the first Indonesian monastic order in Semarang, central Java, in 1959. Pioneered by Indonesia’s first bhikkhu, Ashin Jinarakkhita, the ceremony of monk’s ordination was attended by Buddhist monks from Thailand, Cambodia, Myanmar, and Sri Lanka. In the history of Buddhism in modern Indonesia, this event was the hallmark of the revival of Buddhist institutions. It also shaped the relationships between the Indonesian Buddhists and other Buddhist institutions and communities, particularly those in mainland Southeast Asia. The relationship with these Buddhist community has given rise to more diverse expressions of Buddhism in Indonesia. One of the examples is the growing relationships between Buddhists from Indonesia and Myanmar.

In contemporary times, the Myanmar-Indonesia Buddhist relation has resulted in the production of more and more material culture. In the year 2000, an Indonesian Buddhist monk named Bhikkhu Khantidharo met the First Secretary of State Peace and Development of Myanmar, General Khin Nyunt, to propose his intentions to build a replica of the Shwedagon Pagoda in a Buddhist Vihara in Batu city, Java Island. In its place of origin, the Shwedagon Pagoda is the most important Buddhist pagoda. Built in Theinguttara Hill in Yangon, Myanmar, the Shwedagon Pagoda stands graciously covered by gold plates. The pagoda is a hallmark for the history of Buddhism in Indonesia and it is said that eight strands of the Buddha’s hair were originally brought by two merchants in the lifetime of the Buddha and enshrined in the pagoda.

During my visit to Vihara Dhammadipa Arama in Batu, East Java, Bhikkhu Khantidharo, one of the founders of this Buddhist Vihara recalled that the pagoda was first intended to be built in one of the Buddhist viharas in Jakarta. Though the replica was smaller than the original, it could still not fit the space where the pagoda was supposed to be built. Later, it was decided that the replica of the pagoda would be built within the compound of the Vihara Dhammadipa Arama. The process of building the replica was eventually started on 5 August 2001. The height of the pagoda is 15 meters, and the base of the replica is 18 meters. Unlike the original pagoda in Myanmar, the base of the replica of the Shwedagon pagoda was designed so that it has functional rooms intended for doing puja (prayer) in the first floor, and meditation rooms in the basement. The puja rooms are divided into eight sections based on the Burmese understanding of the planetary movements. Burmese astrology recognizes an eight-day week, with Wednesday being divided into two days: until 6:00 p.m. it is Wednesday, but from 6:00 p.m. until midnight it is Rahu’s day. Each of the 8 planetary posts has an altar for a Buddha image where Buddhists can perform puja based on their date of birth.

The building of the replica of the Shwedagon Pagoda involved the participation of both countries. Bhikkhu  Khantidharo said there were at least four architects from Myanmar who were sent to assist the process of building. The Buddha statues, the Buddha relics, other ornaments, and financial support were all donated by the Myanmarian government and the Buddhist community from Myanmar.

The opening ceremony of the Patirupaka Shwedagon Pagoda took place on 7 December 2003. The ceremony was attended by the Myanmarian ambassador to Indonesia, prominent Buddhist monks from Myanmar, the tipitakadhara (monks who have memorized the Tipitaka canons), and Buddhist donors from Myanmar. From the Indonesian side, the ceremony was attended by Buddhist monks who were representatives of the Sangha Theravada Indonesia organization and Konferensi Agung Sangha Indonesia (the noble conference of Indonesia Sangha—this Sangha is a platform for both Mahayana and Theravada Buddhists monk in Indonesia).

The building of the Patirupaka Shwedagon Pagoda is just one of many examples of the development of contemporary Buddhism in Indonesia, which is uniquely shaped by global flows of cultures, materials, and information.

Yulianti is based in the History Department, Faculty of Cultural Sciences, Universitas Gadjah Mada, Indonesia. Her research interests include transnational Buddhism, history of Buddhism in Southeast Asia, and religious material culture and heritage.

Counterpoint  blogs may be reprinted with the following acknowledgement: “This article was published by Counterpoint: Navigating Knowledge on 20 September 2022.”