Gandhi as Socially Conservative Dissident: Pondering the Contradiction 150 Years On 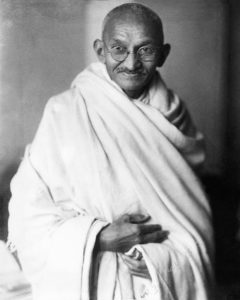 Scholars of Mohandas Gandhi confront a curious and persistent paradox in their studies of this historical giant born a 150 years ago this month (October 2, 1869). The most radical anti-colonial activist-thinker of his time or any other, one who enabled India’s masses to set themselves free from British colonial rule, also remains a profoundly conservative thinker. On questions of caste, religion, conversion, and the organic bonds of village life, Gandhi was suspicious about human capacities to extricate ourselves from traditioned patterns of belonging so as to assume novel identity configurations. Gandhi’s writings suggest that severing textured interconnections to place and inherited identity is a kind of violence, a violence that is inscribed into the very fabric of the modern. The rootless and placeless autonomous modern self, who enjoys only rights and is enjoined no duties, is a creature produced by violence who, in turn, perpetuates violence including, of course, the violence of colonialism.

On the other hand, both in his own personal life and the larger life of nonviolence to which he invited the nation’s masses, Gandhi affirmed that human beings possessed immense capacities for and, therefore, the obligation to engage in transformative self-fashioning in pursuit of spiritual perfection. Such transformation is not restricted to personal self-crafting alone but to the reinterpretation of traditions including their attendant political practices. Thus, following the quest for truth might well entail becoming a political dissident rather than passive acquiescence to an unjust status quo. Resistance even unto one’s own death (but never unto the killing of another) may be necessary. Such a posture must, of course, be recognized as truly radical—a willingness to dismantle all structures of violence which diminish human flourishing.

One of the persistent and unfinished tasks that remains for Gandhi’s reader is the work of discerning how Gandhi curiously manages to maintain both postures simultaneously. Just how does one manage to be a socially conservative dissident? Is such a posture intelligible or is it self-contradictory?

Consider, for example, the question of conversion. Gandhi was stridently opposed to conversion from one religious tradition to another and so was troubled by the Christian missionary enterprise. Gandhi is famously remembered for insisting, “If I had the power and could legislate, I should certainly stop all proselytizing” (p 46). Thankfully, Gandhi did not have that power, and the Indian constitution came to enshrine the contrary notion that freedom of religion must include the freedom to propagate one’s religion, and if necessary, undertake conversion.

Conducting the debate around conversion is not the issue here. Rather, I mean instead to call attention to Gandhi’s insistence that although Hindu traditions can and must be reconfigured, they cannot be abandoned. The Hindu is invited to become Hindu otherwise but cannot become otherwise than a Hindu.

That Gandhi was quite radical in reconfiguring the meaning of Hindu texts and norms of practice is well-known. One need only read his interpretation of the Bhagavad Gita—a dialogue between the warrior, Arjuna, and the divine Krishna in which Krishna enjoins Arjuna not to shirk his obligation to lead a fratricidal battle—as a text that teaches nonviolence to know that Gandhi’s exegetical endeavors can be quite daring. The same can also be said for Gandhi’s vigorous insistence that all in his ashrams must engage in the work of emptying chamber pots and cleaning toilets (which included compelling his wife to take up the task against her deep seated aversion), a practice that was understood as polluting and so to be reserved exclusively for untouchables. Both textually and practically, Gandhi was not tinkering around the edges; these are major, demanding, and creative reconfigurations of tradition. Nonetheless, Gandhi maintained that caste divisions have their social function and need not be erased; what must be undone is the esteem accorded to some forms of labor over against others. Hierarchy no; caste yes.

By contrast, Gandhi’s major progressive rival B. R. Ambedkar found Gandhi to be incurably naïve about caste and its depredations. Ambedkar is perhaps most famous outside India for one of his final major actions on the global stage: leading a mass conversion of 380,000 Dalits, formerly called untouchables, to Buddhism. If there is a single Ambedkar utterance that is likely to be well-known to those who are not students of the Indian scene, it is his pronouncement, “I was born a Hindu, but I will not die a Hindu.” Among the many issues of contestation at play between these two intellectual titans, then, is the question about the malleability of human identities and the socio-cultural bonds through which those identities are configured, contested, and, if necessary, abandoned.

These questions about identity and belonging cannot be treated as provincial preoccupations of Gandhi scholars alone. They go to the heart of the broader encounter between tradition and modernity and what must come thereafter. By traditional societies, we refer to those societies in which human beings are understood to become who they are through extensive networks of familial, regional, geographical, and communal ties—ties which give to human beings both identities and obligations of duty that come encoded in those identities. By modern societies, we mean societies in which human identity is understood not as given but instead elected and configured by autonomous self-fashioning. Moral imagination operates not by appeal to inherited duties but rights granted to autonomous citizens who are entitled to pursue their desires unfettered but only so long as the rights of others are not infringed.

One hundred and fifty years after Gandhi’s birth, we find ourselves in a historical moment in which many of Gandhi’s antiquarian impulses now seem to have a wisdom that, in his time, seemed exceedingly strange. In a time of ecological crisis, attention to place and the precious intimacy of local communities grows as the very real prospect of global food system collapse presents itself. Gandhi’s critique of predatory capitalism and its capacity to devour nature now seems prescient—at least a century ahead of his time—as are his attempts to think of alternative “small is beautiful” economic configurations. Are we now prepared also to critically revisit just those concerns of his that seemed then especially retrograde, most especially his intuitions concerning the rootless, alienated, and endlessly desiring modern self who belongs to no place and to no one? How might we do so without falling into some of his most troubling errors such as his incontestable shortsightedness regarding caste? These questions remain very much with us and only grow in urgency as we move into an uncharted planetary future.

John J. Thatamanil is Associate Professor of Theology and World Religions at Union Theological Seminary. He is the author of The Immanent Divine: God, Creation, and the Human Predicament and the forthcoming book, Circling the Elephant: A Comparative Theology of Religious Diversity. He teaches courses on comparative theology, theologies of religions as well as a course on Gandhi and King. He is a past-President of the North American Paul Tillich Society and the founding chair of the American Academy of Religion’s Theological Education Committee. His Op-Eds have appeared in the Washington Post, the Los Angeles Times and a variety of sites online.

Counterpoint blogs may be reprinted with the following acknowledgement: “This article was published by Counterpoint Navigating Knowledge on 23 October 2019.”