On Absent Priests, the Dignity of Women, and Refugees 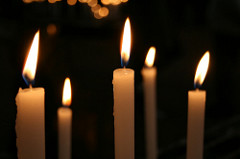 In a Roman Catholic monastery near the prairies of the American Midwest, more than a hundred Sisters gathered to mark the Sunday of the Epiphany, a Christian feast of light and divine presence. The musicians have been tirelessly practicing special music. But as time comes for the prelude to begin, there is a delay, for there is no priest.

The women cannot be their own priests in this Roman Catholic community. A number of the women know themselves to be called to priesthood, but this is not a path open to them. They have found rich and meaningful lives in the monastery, but at this moment on Epiphany Sunday, it would surely help if women could be priests so they could get on with their worship on their shining day.

The priest has forgotten to come. By longstanding practice, a men’s monastic community a few miles away supplies this women’s community with priests. Forgetting the women’s worship is not very usual but happens often enough that it is a thing people know about.

A back up plan is in place. Worship, without the central sacramental rites, can proceed. The Prioress of the women’s community may lead this abridged service, and a prayer book stands ready in the sacristy. Just in case.

In the late 1980s, the Vatican under Pope John Paul II issued “Mulieris Dignatatem” or “Dignity of Women.” Over the preceding century, feminist movements in several western countries had substantially improved the condition of women. With this document, the Roman Catholic church acknowledged those changes while still denying the rightness of many of them. Women have a beautiful dignity, the document affirms, and are vitally needed in the human family–but through their union with men and in their capacious receptivity and caregiving. The document makes important claims about mutuality and equality between marriage partners and about the wrongness of male abuse of women. But by the time of its publication, feminist theologians had already explained the problems of defining women’s personhood in distinction or complementarity to men. Gender theory was questioning static notions of “women.”  So the Vatican document was left trying to convince its own choir that it was part of the conversation. To some, it seemed designed to help the church justify its old teaching while sounding more contemporary.

As we started 2019 in one snow-nestled monastery of women, the dignity and role of women was still in question as they were impeded from worship by the absence of a man. After waiting a bit, the Prioress got the microphone and the prayer book for the abridged service and began to inspire a warm and wonderful worship. Just then, however, a priest was found, borrowed from the neighborhood parish. Arriving on foot from the other church, which had been celebrating an old, historic liturgy, the priest ironically was wearing old fashioned, ornate vestments–clothes of the past. And indeed, his arrival threw the women back into the past, before the questioning of female dependence on male priests.

It was a punch in the gut to the spirit that the Prioress was rousing–a spirit of ability together, to carry forward as persons of dignity who can both receive sacred power and wield it out loud with songs of light in the northern hemisphere’s darkest season.

This is not an isolated wound and it is far less drastic than most other violations. The dignity of human life itself is in question with the scale of our ongoing refugee crisis. I am certain that the Sisters of this monastery would prefer that attention be paid to the world’s numerous “widows, orphans, and strangers,” to quote the Hebrew Bible. They are the people whose dignity needs most urgently to be recognized.

I suspect the dignity of women and refugees are of a piece. A world where communities of women are seen as capable in their own right, without the intervention of patriarchally ordained outsiders, runs together with a world where vulnerable displaced persons have voice and agency in their futures. At least, this is a possibility which I would like to hold up as my religious tradition marks the feast of Epiphany.

If Christian traditions have something to offer our current crises, perhaps one idea—seen for example in the welcoming yet powerful figure of Jesus–is that hospitable receptivity need not be the complementary opposite of activism and achievement.  Gender Studies also uncouples these two human modalities from traditional “femininity” and “masculinity” and suggests instead that they fall on a range of human capacities. People of any gender can change the world with hospitality and activism.  At the dawn of the new year, I hope that many will start their preludes now and wait no longer for someone else to authorize their resources for action.

Anna Mercedes is Associate Professor of Theology and Gender Studies at the College of Saint Benedict and Saint John’s University and is ordained in the Evangelical Lutheran Church in America.  She is the author of Power For: Feminism and Christ’s Self-Giving

This Counterpoint blog post may be reprinted with the following acknowledgement: “This article was published by Counterpoint: Navigating Knowledge  on 16 Jan 2019.”