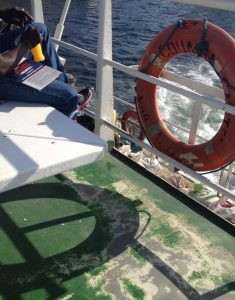 For the last year, as city noise turned down—bass, tires, alarms, motors, the gurgitative sputter of diesel-fueled transport—I tuned in from the square aerie of my skyward apartment to novel sounds: a robin’s flutish speech, resounding in the quiet, and, through my headphones, human speech, sometimes tinny over WIFI. The final leg of my therapist-training, which coincided with the pandemic, had moved to video.

Through the small adventure of these novel sound-assemblages, I remembered a simple thought formed long ago: whatever therapy is, its task appears fundamentally related to human ideas about being human. Sylvia Wynter argues that “the human” has been “overrepresented” as white, Western, and middle-class, a figure metonymizing the white bourgeoisie “ethnoclass.” Zakiyyah Iman Jackson extends analyses of “the human” by finding in humanist discourse the “untenable dichotomy” of human-animal, with “Black(ened) humanity” and reproduction positioned between.

Caught in a loop of self-negations and self-inspections, anxiety and depression iterates through the context of wherever and whenever it appears. In the pandemic’s stillness, faultlines of injustice crazed the surface of who “we” are—individually, relationally, nationally. The craze lines became grooves from which emanated sounds of worry and woe: Am I lazy and unproductive? Am I “stupid” and odd? I’m unemployed, I’ve been attacked, I feel alone. Perched at my computer as though at a gramophone, I listened for speech like this, and behind this speech, I listened for the footfall of “the human”—phantasmagoric, metonymic, and alienating self from self, other, and the political, the social, and the environmental.

Man, it appears, has inherited essentially three brains. Frugal Nature in developing her paragon threw nothing away. The oldest of his brains is basically reptilian.

Human psychology has historically defined “the human” as exceptional, an isolato in a world of insentience. Though few today would caricaturize the more-than-human metazoa as so vastly insentient, forms of human exceptionalism persist in psychotherapeutic texts. Psychologist Gregg Henriques conceptualizes human consciousness as uniquely self-aware and functioning as a “justification system” amidst competing values and beliefs. Yet it’s widely understood that other animals pass the mirror test, meant to measure self-awareness—a feat, unfairly requisite, since many nonhumans, and some humans, do not rely on sight. (Imagine a conceptual model that hierarchizes according to sonar sense: bats would win the crown.) If “humans are the justifying animal,” I’d rather count myself among justice-minding animals, such as rats, who give up rewards to help their fellows.

Therapeutic approaches grounded in anthropocentric epistemology can tank therapeutic work. Steven Porges’s “polyvagal theory,” which links several (debunked) claims, illustrates. Porges assigns human stress responses to our vagus nerve, dividing both nerve and response into a phylogenetic hierarchy. Supposing that the dorsal vagus can be traced to a reptilian ancestor, Porges argues that its unmyelinated fibers activate human emotional shutdown and, for the layperson’s use, provides evidence in the form of reptiles’ behavior “in pet stores,” which he takes to exemplify the freeze response. The ventral vagus is mammalian in this model, responsible for both fight-or-flight and re-grounding—the ostensibly more evolved response to stress. The circuit to this calming, Porges claims, is the face-heart linkage with the vagus, what he calls the “social engagement system.”

Imagine the following scenario. A client newly taking an SSRI reports somnolence—a common initial side-effect. The therapist nonetheless assumes somnolence to signal a dorsal vagal immobilization and says so. The client balks at the suggestion, reiterating that the medicine’s impacts are too much. Still, the therapist believes that activation of the social engagement system—assumed to establish safety—will relieve the client of fatigue. After all, Porges’s theory appears to neatly, comprehensively, and deterministically map the human autonomic system and its interface with evolution.

What pattern connects the crab to the lobster and the orchid to the primrose and all four of them to me? And me to you?

In recent years, varieties of materialism and affect theory have provided post- and eco-humanities a means to surpass human-animal/human-nature binaries. Gregory Bateson’s systems theory provides an alternative: a paradigm of mind that, as Jasper Hoffmeyer notes, is “a particular instantiation of a nature that is in a deep sense itself minded.” For Bateson, materialist philosophy does not account for the symmetry, self-organization, responsivity, and mutuality immanent in the world. These characteristics evince mind; all systems are minds; and a system is composed of individual parts that communicate—detect, receive, signal, respond. World is composed of systems within systems, all communicating, in neither only linguistic nor only human forms.

For Bateson, communication is catalyzed by “news of difference.” Importantly, difference does not exist except in relationship, and relationships do not make sense except as differential systems. Bateson provides the example of the sight sensorium, which composes an image out of differences such as near-far, and he isomorphizes the biological to the interpersonal: you are not x, y, or z except in relation to someone, and you are not x, y, or z in relation to all someones. Bateson’s systems theory provided the founding ideas of marriage and family therapy (MFT). At its very origins, MFT diverged from psychology, which historically pathologized the individual, by conceptualizing dysfunction and wellness as relational and systemic. As such, MFT has within its marrow profound liberatory potential.

Bateson’s epistemology of difference may be brought into proximity with Édouard Glissant’s. As I’ve written, Glissant seeks a mode of relation between individuals and cultures that does not collapse difference, namely under the imperious gaze of Western subjectivity. Though Glissant’s Relation is systemic, Glissant eschews the cybernetic model of Bateson’s early work in favor of poetry; computers “[render] the sudden flash ordinary,” whereas poetics provides a chancing and open (non-exploitative) discovery.

To the tandem of Relation and difference, Glissant brings an idea of world as totality without totalitarianism, one made possible only if we honor opacity, or the right to unknowability. This right is made requisite by the faultline of slavery, its vicious hurling of commodified people and their tapestries of knowledge into unknown lands, where unknowingness transformed over time into the beauty of creolization. Because in slavery, the rootedness of one people is taken away so that another can take root, Glissant’s environmentalism—an often overlooked but vital part of The Poetics of Relation—can have no fetishization of the past and no commodification. Glissant’s environmentalism is instead an “aesthetics of the earth” founded in “rupture and connection.”

A need for therapy arises when we are bewildered or broken by the relational, by the systemic, by who and what should have buoyed us. What is the task of therapy? What does therapy do? It reharbors relationality in a space free of shame, denigration, or perfectionism, where moments may be created for noticing, without judgment of self or other, “news of difference” that’s hurt. Through noticing together, client(s) and therapist, through that relation, contexts shift and new improvisations and compositions may be tried. In short, therapy invites the voice that had been made tremulous, silent, or inflexible to loop back into world, into polyphonic, biophonic, Relation. The client who takes up the invitation does so not because therapy has made alterity disappear, but because therapy has shown alterity to be what is. In this, a praxis of difference so different, therapy must be—despite some theorizations—anti-anthropocentric.

Counterpoint blogs may be reprinted with the following acknowledgement: “This article was published by Counterpoint Navigating Knowledge on 6 May 2021.”

The title of this piece derives from Sylvia Wynter: On Being Human as Praxis (edited by Katherine McKittrick) Durham and London: Duke University Press, 2015.