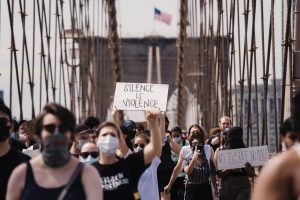 “[A] force of opacity is at work … considerate of all the threatened and delicious things joining one another (without conjoining, that is, without merging).”

A potent and febrile summer of suffering, rage, resistance, and joy. Flyover Minnesota became the site of a groundswell for righteous revolt. Thousands protested locally against the murder of George Floyd and countless other black people by police, catalyzing a movement that took hold in 2,000 cities across the nation and the world.

It seems almost a decade since anthropogenic environmental and epidemiological catastrophes—the pandemic and the floods and bushfires before it—convulsed through our lives. But recently, news reports have attempted to link the pandemic to protests by considering the effect of COVID-19-related lockdowns. Perhaps, reports speculate, “cabin fever” has been propulsive, galvanizing a greater force than might have otherwise assembled.

The connections between these global events are more profound. Often where human oppression necessitates human resistance, on that very ground, exploitative practices have distorted the land and displaced or decimated nonhumans. In Australia, where settler colonists enslaved and assimilated Indigenous persons over the centuries, the bushfires of 2020 ravaged a land made dry and erosive by the clearing of native forests for sheep, cattle, and wheat. A billion animals died in the fires, a fraction of the 72 billion land animals slaughtered worldwide each year for food.

Dr. David Pellow writes in What is Critical Environmental Justice?: “human suffering and social inequality are … sites where that pain is intimately linked to the harm visited upon fragile ecosystems and other animals.” One such locus is the slaughterhouse, a place of danger for human wage-laborers and of abject death for nonhuman animals. Twenty-five percent of frontline meatpacking workers are black and 44% are classified by the census as hispanic, while just 19% are white—a considerable disparity, in real numbers. American slaughterhouses have also become hotspots for coronavirus, a zoonotic illness that, like the “avian flu” originating in the U.S., arose from consumption of animal bodies—and disproportionately affects BIPOC communities.

In Racism as Zoological Witchcraft: A Guide to Getting Out, Aph Ko defines white supremacy as both “anti-Black and anti-animal” and a “colonial force that works to ‘get inside,’ consume, and destroy.” Ko names the insidiousness of this “getting inside” a white witchcraft and tracks it through the historical example of Nat Turner, whom whites cannibalized, and through the filmic example of Jordan Peele’s Get Out, in which a cult attempts to render a black man’s body into a host. Peele draws the man, protagonist Chris Washington, into proximity with other beings at several key moments; critically, Washington’s coming-to-awareness occurs in sight of a mounted deer’s head. As Ko notes, bodies become expendable by being named “animal,” a pernicious slur used against people of color.

Challenges to the protestors, especially online, often revealed a hostile heuristics meant to entrap. Some challengers demanded to know why, if COVID-19 is so virulent, protests continued. To the challengers, the answer would expose the protestors as irresponsible or expose the coronavirus as a sham and in either case confirm a worldview. The point is the performance of power, the trap. When in 2015 a Texas state trooper pulled Sandra Bland over on a pretextual traffic stop, he aggressively declared, “You seem irritated,” a statement that implies a question and connotes a demand—the demand that Bland explain herself. The epistemology of the demand attends acts of oppression. The consequence for failing to answer or to answer satisfactorily is death.

Against the demand for transparency, the poet and philosopher Èdouard Glissant developed a counter-epistemology of opacity. Opacity names difference. Glissant calls for “the right to opacity,” or the right not be exposed to, not to be enfolded within, Western ways of knowing. Opacity shelters identity from judgment and generalization, but does not ossify and seal it from contact. As Glissant writes in The Poetics of Relation: “Opacities can coexist and converge, weaving fabrics. To understand these truly one must focus on the texture of the weave and not on the nature of its components. For the time being, perhaps, give up this old obsession with discovering what lies at the bottom of natures.” Glissant calls this weave and texture “Relation.” In Relation, opacities ceaselessly transform and are transformative.

While human cultures are the primary subject of The Poetics, Glissant’s imaginary encompasses the land, the environment, and other animals. Glissant writes about a “clan of little goats” and their “circular, disjointed movement, from their hungry storming of the garden to their panicked departure, [which] never changes.” Circular movement describes Relation. Glissant evokes its ethos when he concludes: “And l could never imagine closing the garden gate or banning the animals’ detour.”

The movement to abolish the police, to occupy autonomous zones, and to make sacred and communal sites of black trauma, such as the intersection where police murdered George Floyd, seek to inaugurate more just and reciprocating forms of community, foremost for black lives. Community exists in, and as part of, ecosystems; it occupies space and includes other animals. The most pressing concern is to stop violence against black bodies. But as organizing expands to create zones of community in which mutual aid substitutes for rapacious capitalism and city streets transform with memorial bouquets and bursts of poetry, questions form in the distance. What would an anti-racist utopia look like for human dwelling on this earth, with one another and with other beings? Of what would its ethos and art consist? What limits might be found there?

Counterpoint blogs may be reprinted with the following acknowledgement: “This article was published by Counterpoint Navigating Knowledge on 17 June 2020.”

Therapeutic Praxis Beyond Being Human – Counterpoint: Navigating Knowledge · May 6, 2021 at 7:41 AM

[…] epistemology of difference may be brought into proximity with Édouard Glissant’s. As I’ve written, Glissant seeks a mode of relation between individuals and cultures that does not collapse […]