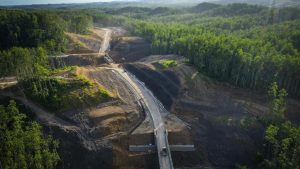 In January 2022, I was assigned to host the Thursday Online Forum (Forum Kamisan Daring) event held by the Intersectoral Collaboration for Indigenous Religion (ICIR) Rumah Bersama in Indonesia. ICIR is a network of several organizations advocating the interests of indigenous communities in Indonesia. The theme of the third episode of FKD is “Women Defending the Land, Preserving Tradition, and Caring for the Earth.” Every week on Thursday, FKD provides different themes relevant to issues of customs, religion, and beliefs. In that episode, one of the speakers, Isnah Ayunda, came from an indigenous community in Paser, which is in East Kalimantan.

In the discussion, Isnah explained how indigenous communities have espoused values related to the relationship between humans and nature. Then, she described the conflicts between industry and local communities in East Kalimantan over environmental destruction. Lastly, she conveyed her protest of the construction of the new capital city there, as an indigenous person who represents whole communities of East Kalimantan, and in particular indigenous women.

Due to climate change, Indonesia is moving the capital away from Jakarta, which is suffering from massive flooding already during the rainy season.

Environmental crises in East Kalimantan have already been experienced by the Paser community even before the plan for the relocation of Indonesia’s capital. It was initially caused by industrial development—mining and palm oil—which had not implemented Environmental Impact Assessments (AMDAL) in a responsible manner. The form of environmental damage experienced is the contamination of rivers and the reduction in forest area, both of which are a source of livelihood for local residents. In fact, a large-scale concession experienced by the local community was a major flood that hit their area. In the beginning, when the palm oil and mining industries had not yet been established, they had never experienced this type of floods that destroyed their property. With the new capital city project, there is the potential for major floods to occur, which will be more frequent or at a larger scale due to deforestation and other environmental impacts.

The threats of industry and the relocation of the capital to East Kalimantan are not only to non-human nature but also to the local communities that often experience intimidation and threats from company officials and authorities. In particular, women are victimized because they are treated unfairly by being made to work in these development companies, without receiving proper compensation. There are many violations of the rights of indigenous Paser women including the size of their living space, the environmental management of areas being developed, and the loss of traditional knowledge. When development in the name of increasing people’s welfare continues to be intensified, what often happens is that their rights and existence become more under pressure.

They don’t need the development of infrastructure and industries that continue to exploit nature and infringe on their rights; what they need is their own version of welfare, namely the preservation of their natural places and thus their customary traditions. There have been many efforts to work towards the welfare of these indigenous women. One effort is to resolve conflicts through dialogue and conversations with various authorities in order to restore their rights. The institutions advocating for the rights of these women include the National Commission on Human Rights and the Presidential Special Staff. However, these efforts have so far been minimal. The conflict is still ongoing and these women still have to face various environmental problems and injustices.

These industrial threats, along with the existence of the new capital city project that has been ratified by law, have increased the anxiety of the Paser community, especially of women. Their concerns are very well founded, specifically because they do not want their environment to be damaged further and their traditions to disappear. One of the actions they can do now is to speak up through online forums, social media, and independent movements that are accompanied by non-governmental institutions advocating for their rights.

We can observe that the voice of the indigenous people has not yet reached the ears of the government. In the new capital city project, including the drafting of the law, the Paser indigenous people are not heard. As locals, the Paser should be involved in the formulation of the regulations concerning their livelihoods. A policy that only sides with the interests of a few people will only make indigenous peoples continue to experience discrimination, because their rights are often ignored. If they are involved, of course, the formulation of the regulations that require very large funds and careful planning would have to be less rushed to take into account the various needs of these indigenous communities.

The so-called  academic text of the draft law on the new capital city that was recently published, is lacking both theoretical and practical sophistication. Theoretically, an academic manuscript should have systematic and comprehensive frameworks. In addition, it should refer to scientific references and pass the peer review process by reviewers who are competent in their fields. Meanwhile, in terms of praxis, academic texts should examine the situation from social, cultural, economic, and environmental perspectives focused on the given community, including the risk factors and impacts those communities will experience.

Therefore, all stakeholders, including academics, activists, and those local peoples affected need to look at the issue of the new capital city construction from multiple perspectives. The rights and very existence of the indigenous people there, especially indigenous women, are threatened. We (academics and activists) need to support their struggle to defend their lands and traditions. Non-indigenous people can participate by amplifying the voices that resist the industries in East Kalimantan and the construction of the new capital city. In order to restore the viability of the future for these indigenous peoples or at least reduce their suffering, their perspectives should be just as important as other voices at the negotiation tables, if not more so.

Fany Hakim is a student at CRCS UGM in Jogjakarta, Indonesia. Her research focuses on issues related to human rights, indigenous religions, and gender studies. She’s currently working on a project with ICIR.

Counterpoint blogs may be reprinted with the following acknowledgement: “This article was published by Counterpoint Navigating Knowledge on 1 November 2022.”