Haunted Ecology and the Denials of Trumpism 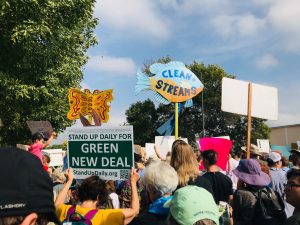 “I would not be the giver of a gift that would prove fatal to you.”

The gales come hard like paddling dogs, falling into and between the rhyolitic fingers of the shoreline cliffs. The rock sifts then gives back the white water through its vertical folds, and in the process, appears to become surf itself. In the bright cold I feel the future, as though ringing the far blue horizon, of earthen sorrow: a haunted ecology.

In the final days of the 2019 Australian bushfires, scientists measured the damage through counts of animal corpora: an estimated one billion nonhuman animals dead. Cognizance of animal-corpora-to-come in the observation of climate change defines haunted ecology. Imbued by dread and self-indictment, this cognizance deepens in the knowing that COVID-19 unleashed itself from animal bodies, likely pangolins, whose skins and meat are trafficked throughout the world, including North America. The affective implications of haunted ecology can arise in psychotherapy sessions. As clinical social worker Brian Casey notes, clients will give voice to “the feeling that humanity, as a species, is a parasite.” Now we count and mourn the human pandemic dead.

In 1973, Murray Bowen delivered a paper to the Environmental Protection Agency in which he applied his emerging family therapy theory to the problem of environmental destruction. In his revision five years later, Bowen wrote that humans are “moving into crises of unparalleled proportions” that will increase in frequency and be tackled “symptomatically” until arises “a final major crisis” in the middle of this century.

Bowen’s predictions derived from his understanding of anxiety and how it galvanizes relational systemic dysfunction. He believed a system in which members exhibit low differentiation, or a reduced capacity to maintain autonomous identities and functioning, cannot easily withstand affective intensity. Members may attempt to dampen stress by increasing togetherness, a phenomenon Bowen calls “emotional fusion” to indicate identities have merged.

When Bowen concludes that Americans will attempt to “symptomatically” handle subsequent disasters, he is referring to a signal characteristic of “societal emotional process”: social problems are reactively triaged rather than deliberatively responded to with long-term solutions. Bowen believed that “society [could] eventually survive” but only “with a benevolent monarch who could really hear the dictates of science.”

In Donald Trump, we’ve had the inverse: a president hostile to both benevolence and science and attempting a flaccid coup. Trump has neither fervor for, nor the favor of, the military and their almost two-hundred-and-fifty year tradition of apoliticism. Without a military force, Trump and Senate Republicans can refuse recognition of president-elect Joe Biden’s 2020 win, but they cannot move against it.

Hybrid of confusion and cruelty, Trump is figurally analogous to the Minotaur, his fascist impulses trapped within an American constitutional architecture. As a result, his governance has taken the form of authoritarian neoliberalism, a political framework that became emergent with Reaganism—but an apogean form at that. His administration has functioned almost entirely to serve the 1% and his personal kleptocracy. It has worked to cut social supports that marginally buoy the poor and near-poor, including social security and food stamps, while suppressing dissent, emboldening white supremacists, and implementing bigoted policies.

What has inspired the ardor of Trumpists? Historians and political scientists offer compelling answers, but none as yet account for climate-change anxiety. One in three Trump voters denies that climate change exists, and while denialism may appear to indicate a dearth of concern, it can in fact function to deflect distress. Social psychologist John Jost found that denial as “rationalization of the status quo,” which he calls “system justification,” is “often associated with short-term palliative psychological benefits.”

The boomerang of anthropogenic climate-change, which rounds back to humans, bringing its pain, withers the phantasm of the sovereign human species. Climate change exposes the ways in which the human and the more-than-human exist in lateral, not hierarchical, relation. To some, the slip of the human from its vaunted station constitutes a final, dizzying insult to the traditional order, already (the thinking goes) too much challenged by social-justice movements.

What Trump has offered, as fascists have, are gestural and rhetorical intimations that he harbors almost superhuman eminence—an implicit assurance that the human yet reigns. At the dais, Trump invokes Christ’s name then points, as though he’s called in a child who now appears. He lassos air with finger and thumb—a micro-dominance of space, his will both large and molecular—and opens his hand to throw the gases like dice or magic beans.

Throughout his term, Trump invented victimizations, that, by having little or no reality, provided him with nominal “obstacles” over which he could perform the triumph of durability. So Trump, schlubby but auspicious, proceeded until COVID-19 presented the apotheotic opportunity for self-aggrandizement: he caught the coronavirus, survived it, and promptly declared himself close to Christ, a Superman. In his analysis of fascism and the Freikorps, Klaus Theweleit argues that the fascist does not, as is commonly understood, fetishize death. He writes: “It is not corpses that [Hitler] loves; he loves his own life. But he loves it…for its ability to survive. Corpses piled upon corpses reveal him as victor, a man who has successfully externalized that which is dead within him, who remains standing when all else is crumbling.”

Trump made no war of nations; he assembled no killing squads, architected no Final Solution. Instead, COVID-19 became his democidal apparatus: he denied its virulence, closed federally funded testing sites, diverted deliveries of personal-protective equipment, and staged what became super-spreader events. Perhaps tens of thousands of pandemic deaths could have been prevented by a federal response. In place of the haunted ecology of climate change, Trump erected a haunted landscape of cruelly disinterested governance. But it’s that disinterest—and attendant denial—which Trump offers as a model of exultance.

In systems formed by despots and their followers, the latter anesthetizes against existential uncertainty by adopting a “pseudo-self” composed of the former’s affects, values, and beliefs. The most ardent Trumpists gave up differentiation to an unexpected degree. Some traded the phenomenological autonomy of independently apprehending facts and sense data for Trump’s self-interested negations. Others, to touch the power of taboo, assumed the Trump-made maw of gleeful cruelty. But fusion provides only a temporary shelter; as the nexus between despot and followers tighten, anxiety rebounds. So the Nevadan who yelled on camera, “The Biden crime family is stealing the election! The media is covering it up! We want our freedom for the world…” seemed genuinely in fear.

American political culture can repair—but the processes of differentiation sometimes take generations. Fusion moves toward differentiation through change in one component or member, which in turn catalyzes adaptations in other components or members. The system that Trump, his enablers, and his supporters compose is itself a component of the greater American electorate. As another component of that electorate, activists and politicians must now detach from Trump’s erratic pronouncements, giving up—to the extent possible—“symptomatic” reactions in order to jumpstart systemic change and focus on long-range goals. Imagine: a Twitter in which the opposition seldom responds to Trump and his ilk, instead noting without comment when a statement provides valuable information.

A truth and reconciliation commission might also prove crucial, precisely by calling attention to Triumpian psycho-political processes that future fascists could employ. Proceeding on to the next administration without a public airing of the facts might, for instance, leave obscured the techniques of disinformation that duped so many. In an era of denial, shared recognition that truth exists could also provide a pathway to reconciliation, one that appeals to something beyond personality and its diversions.

Patterns unfold over all our lives imperceptibly, sometimes ending in grief.

Our griefs have been many.

Counterpoint blogs may be reprinted with the following acknowledgement: “This article was published by Counterpoint Navigating Knowledge on 11 November 2020.” 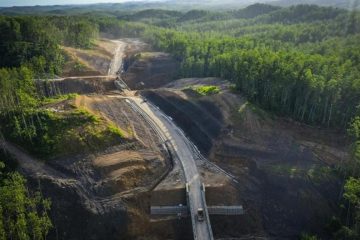