Do Better than Barmen: “Say Our Names”

Shortly after 9/11, 2001, I was in graduate school studying theology just outside of New York, and much of my theological analysis was turned toward “empire.”  The imperial might of America’s political and military power had me raising my theological eyebrows and taking to the streets in protest. As a Christian theological student, I wanted a counter-imperial path for my tradition.

This desire mostly took me into feminist and womanist theology as ways to generate power that didn’t rely on holding power over others.  But I also looked back at the Barmen Declaration, the 1934 document by which some German churches declared their theological autonomy from the Third Reich. For me, studying Barmen was a window into a way churches could try to practice counter-imperial policy. My major take-away from studying Barmen was this: it didn’t work. We must do much better.

As Victoria Barnett, historian, Bonhoeffer scholar, and former director of church relations at the United States Holocaust Memorial Museum, demonstrates, Barmen did succeed in patching an (immediately contested) compromise among diverse church bodies that sought to distinguish themselves from the Third Reich. But it did not succeed in expressing or activating solidarity for neighbors suffering violence in their midst. By the time of Barmen, the atmosphere of violence was already ominous though it was years before the vast genocide of the Shoah.

As Barnett explains, by the summer of 1933, “almost 50 concentration camps had been set up around the country. Violence, especially at the hands of local SA groups, had free rein. Jews in particular never knew when they might be beaten or summarily arrested, the target of public humiliation, arrest, torture or even death.”  As an excruciating example, minutes of a 1933 meeting of concerned interfaith leaders in New York show discussion of, as Barnett reports, “four Jewish brothers who had been arrested, tortured and murdered, with their mutilated bodies returned to the family.”

Considering this awareness of brutality documented even on the international level, the Barmen Declaration was glaring silent about Jewish suffering. As Barnett writes, “All this should add a cautionary note to any attempt today to portray Barmen as a symbol of political resistance or a cry of conscience, let alone as an act of solidarity with the victims of Nazism.”

Two decades later, in the summer of 2020, I was in Minnesota as the state locked down by pandemic erupted into an uprising for justice after the murder of George Floyd. As Minneapolis burned and whole interstates were shut down by rivers of protest for justice, some of my colleagues in the churches were already agile and active in the movement for Black life. But for the most part, I witnessed a kind of bizarre dissonance as many church colleagues continued to explore how to do church during a pandemic, including how to make Facebook Live work for worship and so on, perhaps with attention to racial justice as one among many justice issues.

Then, a few weeks after Floyd’s death, when officials for the current US president tear-gassed protestors, including clergy, in front of St. John’s Church in Washington D.C. for the sake of a presidential photo op, my clergy-heavy social media feeds were suddenly full of clear indictments of the Trump administration’s idolatry. The administration had gone too far. Soon an energy much like Barmen began to grow as pastors organized in protest. Yet I was only cautiously enthusiastic about this new revival of Barmen, remembering how it had been similarly catalyzed by a need to articulate the church’s theological autonomy but not necessarily to protest Nazi brutality against Jews.

When church representatives from different Protestant affiliations gathered at Barmen, they affirmed together that faithfulness to God must never be impeded by political rules or beliefs. Allegiance to God is more important than allegiance to a political order. Importantly, when that political order interrupted one’s practice of faithfulness by trying to take over the role of the church, this was a sign of the order’s corruption. Thus, the Barmen Declaration made a strong and historical statement against the Third Reich. That is an important achievement, but in the context of well-known persecution and daily harassment in society, its importance pales. Painfully, Barmen was the document of church people who knew about the violence against Jews already beginning in their country. Barnett’s For the Soul of the People: Protestant Protest Against Hitler and her Bystanders:  Conscience and Complicity During the Holocaust tell this story in vivid detail, and her article linked above gives a brief entry point.

By the time President Trump cleared the St. John church grounds of protestors to take his June 1 photo, George Floyd, Breonna Taylor, and Ahmaud Arbery were already dead.  And they are three of the many dead. Why didn’t the churches more immediately identify in those deaths a sign that a church crisis was upon us? Why did it take an offense against church property to more fully rouse especially the white churches’ ire?  What marks the difference between feeling that “he’s stepping on our turf” when a president steps onto church property and “he’s stepping on our turf” when police—government officials after all—force the life from the turf of one’s neighbor’s neck? Kelly Brown Douglas, in her Stand Your Ground: Black Bodies and the Justice of God, points to the reasons why property and profit continue to matter more than black life in America.

The minority of German church leaders who signed at Barmen in protest against the Third Reich failed to name the persecution of Jewish neighbors before it became systemic murder. They neither named it nor identified this violence as the crucial reason for theological and political dissent. Barmen is invoked again while signs of a police state rise around us in 2020 America, but if church protest is to mean more than it did at Barmen, the victims of state violence must remain the reason for political and theological dissent. Invocations of church or religious autonomy may preserve some of our dominant religious institutions, but we can see from church failings in 1934 that if it is racist killing we want to stop, then it is racist killing we will need to name and interrupt.

In the years of Trump’s presidency, Barmen has inspired new statements, among them the Boston Declaration (2017) from a large collective of Christian clergy and scholars, Barmen Today (2018) by faculty and students from the Living School at the Center for Action and Contemplation, and most recently the Clergy Emergency League (2020). But that inspiration is more rightly placed on particular individuals whose actions, often in divergence from the Barmen-supporting Confessing Church, worked to concretely address the suffering of Jews and other victims of the Nazi state—whether by plotting to kill Hitler, as with Dietrich Bonhoeffer; helping Jews escape Nazi Germany, as did Heinrich Grüber, Marga Meusel, and Katharina Staritz; or gathering rationing cards for Jewish people in hiding.

Barnett details this history in “The Legacy of Barmen: Theology Matters,” Touchstone 12:3, 1994, and she concludes that theology does matter. The clerical statements mentioned above are important. It is indeed hopeful that each of these documents specifies forms of violence suffered in contemporary America and names, amid other claims, racism in particular. It’s a start. But in the context of the well-known targeting of Black people in America, Christian naming of racist violence needs to become much more explicit if we are to transcend Barmen.

We learn from Barmen that, tragically, defense of the church’s position and defense of vulnerable people are not automatically the same thing. We will have to work at intentionally keeping these two things together by, for instance, purposefully naming those suffering around us. In so doing, we avoid what Barnett calls “the missing thesis” of Barmen. In 2020 America, this means listening to the call painted across the George Floyd memorial, a call resounding through the movement for Black life:“Say our names.”

Say their names—in formal documents, in everyday conversation, in all types of church decision making—in order to firmly fix the momentum of our faithfulness toward interrupting the conditions of unjust death in society today. Say their names, remember what this struggle is about so that we will do better than Barmen.

Rev. Dr. Anna Mercedes is Associate Professor of Theology and Gender Studies at the College of Saint Benedict and Saint John’s University and is ordained in the Evangelical Lutheran Church in America.  She is the author of Power For: Feminism and Christ’s Self-Giving.

Counterpoint blogs may be reprinted with the following acknowledgement: “This article was published by Counterpoint Navigating Knowledge on 21 October 2020.” 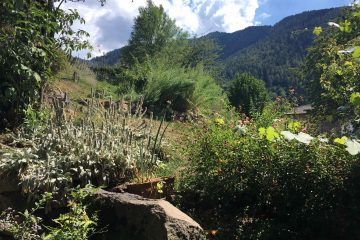 Seeds of Connection, Seeds of Change: Botanical Folktales for Ecological and Relational Storytelling

Seeds of Connection, Seeds of Change: Botanical Folktales for Ecological and Relational Storytelling By Anna Perdibon “Plants prepare for the winter through fruits and seeds, and through discarding what they don’t need. The clearing-out begins,” Read more…

Blue Religion By Justine M. Bakker “Based on my extremely blurry and perhaps unreliable recollection that he once told me so,” writes David Chidester in his contribution to With This Root About My Person, a Read more…

Haunted Ecology and the Denials of Trumpism

Haunted Ecology and the Denials of Trumpism By A. Marie Houser “I would not be the giver of a gift that would prove fatal to you.” —Ovid, Metamorphoses, trans. Charles Martin Lake Superior, early November, Read more…